A fond farewell to a friend: Curtis Edition - FOLK HOGAN

A fond farewell to a friend: Curtis Edition

On May 18th, 2011 at Burts Tiki Lounge we played our second show. We were still figuring things out then, but we had Canyon on accordion, Nick on guitar, Tanner on banjo, and Jeremy on drums. In the crowd that night were two guys standing next to each other; Jared and Curtis. Jared joined a few days later; and when Jeremy decided to leave the band a year later Curtis got the call.

We were all a lot younger then. We were also thinner, had better hairlines, and were still unaware of the glory laid in the future. The thing about asking Curtis to join the band is: He couldn’t. 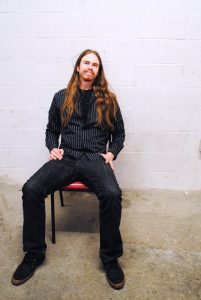 See, someone with Curits’ talents is always in high demand. When we asked if he could join, he was already playing with several other bands, and there was no way he could fit us in to his schedule. He did it anyways. In face, he played the release show for our first album in 2012. He agreed to fill in for a few months until we could find a permanent drummer. A few months later we were still doing auditions, when I got a call. Curtis had decided that we wanted to play with us permanently. We couldn’t be happier! Here is a photo of his first practice in our band space: 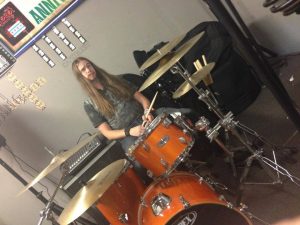 We immediately got to work on the second album, and recording came soon after. 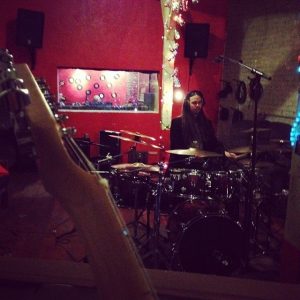 Over the next several years we would play hundreds of shows, in eleven states, and in four countries. When you spend that amount of time together, you become more than bandmates, more than friends; you become brothers. Curtis is, and always will be our brother. Here are a few things that we wanted to share.

A few words from Scott Wardle:

I’m stoked to always share a Folk Hogan family with you. 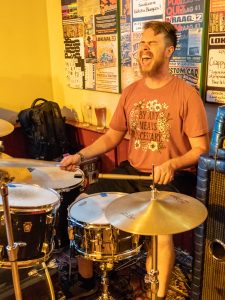 Kameron Anton:
7 years of rhythm, talent, groove, and style have sadly left us, but Curtis will be missed for more than that.

Now I’m not entirely sure what it’s like to have heart issues, but we just lost our heartbeat – and no medication can cure this.. some booze might temporarily help though. Only time will tell. Thinking about that now.. we won’t have anyone to keep time either. Dammit!

I wanted to share my favorite picture of Curtis. Can’t y’all see how bright the room got from that smile? Amazing. Thanks for all the beats and grooves! 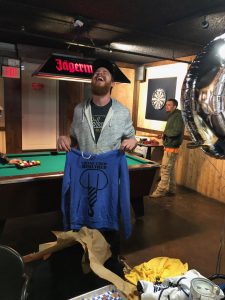 A photo from Curtis’ birthday party in 2019

Nick Passey:
I’m incredibly grateful for the literal hundreds of shows I got to share the stage with Curtis.

His playing is incredible. He knew exactly what to hit and when. We got to tour to Europe and all over the West Coast together. I’ve spent more late nights, holidays, and time with him than any of my family members over these past years.

His sense of humor kept me laughing and his dedication to his craft kept the opportunities for the band flowing. His skills in being a recording engineer helped us create the best studio record we’ve released to date.

Thanks for pushing with us and following the dream all these years buddy. 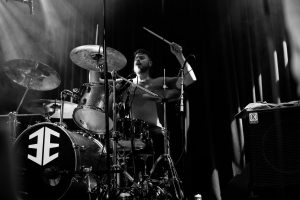 Between the the darkness and the light-

Is where Curtis finds his sweet spot. Socially he seamlessly transverses between some of the crudest people I’ve ever met and the nicest folk I know, as if he’s known each of them intimately for years. Ive always thought this was a talent that went unnoticed. His ability to make demons laugh and angels cry is uncommon at best and in that same way he’s always able to find that same perfect pocket when playing his drums. From rock to metal to R&B or even acoustic singer songwriter, he’s always treading perfectly between the darkness and the light.

Curtis, It’s been an absolute blast playing with you over the years. I’ve enjoyed watching you grow and challenge yourself as a drummer, but also seeing you succeed in you professional life as a recording engineer. It’ll for sure be a bummer not seeing you sitting back there behind the skins, but I truly believe that your talent and hard work will catapult you into great things in the future! I’m excited to see what you get up to next and I hope you stay in touch! Good luck, man! 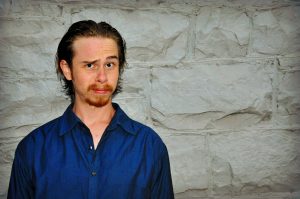 When he got this haircut, we told him he looked “suave”. He went and had these photos taken, and we made up a persona named Schad, and had a lot of laughs about it.

I have a million great things to say about Curtis, but I wanted to talk about someone else who loves him. A few years back we played a show in Mesa, AZ. and we stayed at his grandmothers house a few miles away. She had several beds and had also had a few cots dropped off to accommodate the whole band. She had cooked dinner for us all, and had the whose house ready for us to show up and relax. We got back to her place late that night, and in the morning woke to her cooking breakfast for all of us.

Now, we have had a lot of gracious hosts over the years; but few who genuinely loved one our band members. Seeing the way her and Curtis interacted showed me a side of him we hadn’t seen. A sort of sweetness that can only be had between a grandma and her grandson. 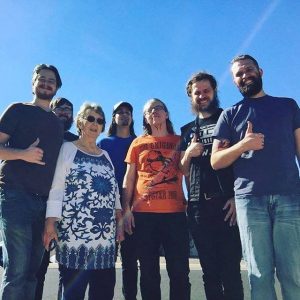 Curtis has always been a genuine, loving, kind person; and this was simply further evidence of a good man. It breaks my heart to see him go, but I am proud of the things he has accomplished. We look forward to seeing what lays ahead for him. We love you, Curtis. You are our brother, forever. 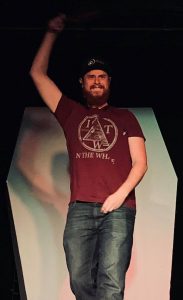