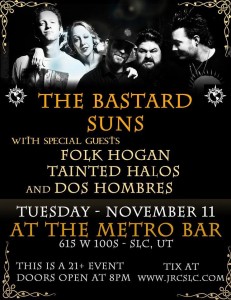 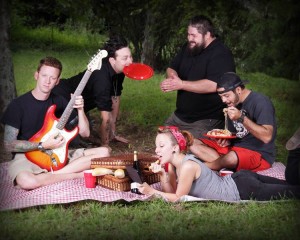 Ladies and Gentleman, children of all ages, after months of writing, recording, rehearsing and training new band-members, it makes me incredibly proud to finally announce the triumphant return of The Bastard Suns.

Although The Suns haven’t performed live in some time, rest assured we’ve been busier than ever. After our last National tour, things were looking bleak. We had just said goodbye to our rhythm guitarist Kevin the year before, and now we were losing our bassist Levon as well. The bottom line is that we have never had any financial help from labels and very little from sponsors, and nine self-funded cross-country tours have left their financial and mental mark. As Levon put it when he said farewell, “I just thought we would’ve gone farther than we did.” And the tough thing about it is, he’s absolutely right. So what does one do when all signs seem to say, “STOP!”? How do you proceed when you’ve come so close so many times, only to fall a little bit short? When you can’t even afford to finance a new album even though the material is already written?
Well if you’re the band that has preached, “Never Say Die”, and, “Hold Fast” for over eight years, you certainly don’t give up.

Instead, we enlisted the help of the preeminent financial startup website Kickstarter and began a month-long promotion to raise $12,000 in order to record and distribute our new album and fund a subsequent National Tour. At the end of the month, we had over $16,000 in fan donations and, more importantly, a renewed sense of purpose. Our music actually means something to actual people, and let’s be honest, when you have that kind of fan base backing you up, label execs and big-time promoters start mattering a whole lot less.
We also found our saving grace in a big, lovable bass player named Mongo. It’s almost like the guy was sent by the rock gods to make sure we didn’t give up. We knew from the first song in the first practice that this guy was the one in a million that could fill Levon’s formidable shoes. My fiancé and long-time collaborator Whitney Carite has also become a big part of our new sound, and it’s great for me to try writing duets and female leads.
As for the new album, we just finished a month-long recording session with our third godsend, Jason Andrews at Spotlight Sound in Atlanta. This guy has worked on everything we have done in the past six years, and he’s a HUGE part of what makes the new one sound amazing.
So that brings us up to the present, and as I type this, we’re preparing to start sending all the prizes for all our loyal Kickstarter friends. (And believe me, there are plenty of those!) Also, we’re beginning rehearsals for our first small tour starting Oct. 3 and planning our National Tour scheduled for early next year. At the moment, the future is bright for your trusty heroes, and thanks to our new-found good fortune and amazing new members, (Haha, I said ‘members’) we’ve all got a renewed feeling of purpose, and it came exactly when we needed it most. (I guess that’s what happens when you’re on God’s I-Pod. It’s called the GodPod just in case you were wondering.)
That’s all I’ve got for now, Bastard Suns, HOOOOOO!