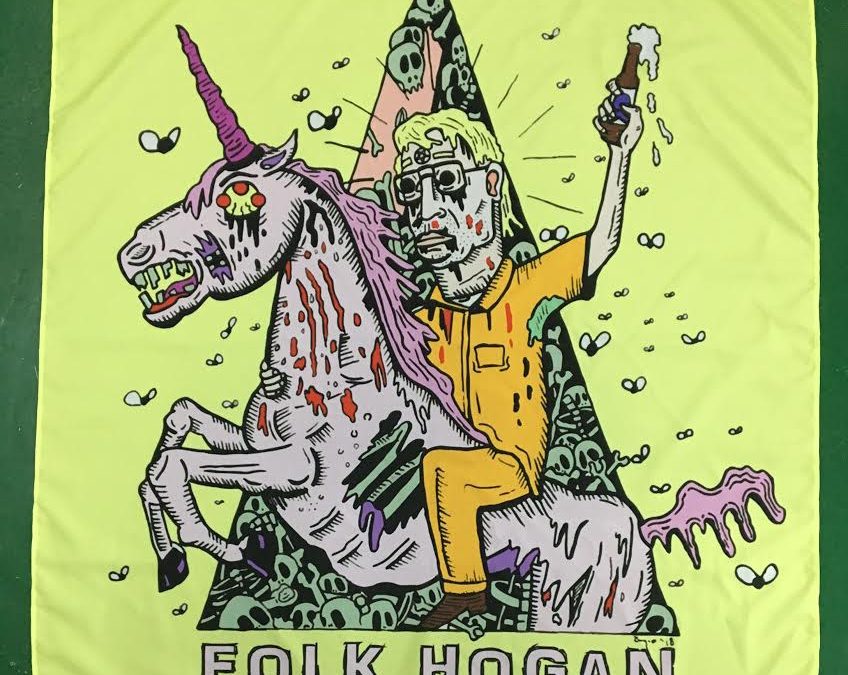 Hey FOLKers! Since so many are quarantined (myself included) I needed something to do, and I figured that I would start a series illuminating the meanings and methods behind some of our songs. So here is the first installation, about a fan favorite song: No Means Jeff. I will be posting the lyrics with notation about what they mean, followed by a summary of how it was written. If there is any song you would like a breakdown of, just email moses@folkhogan.com

Background
In case you are unaware, No Means Jeff is about Jeffrey Dahmer, the Milwaukee Cannibal. Jeffrey Dahmer is known for the murder and dismemberment of 17 people, and for eating some of the remains. Dahmer showed behavioral issues even early in his life. He stated that a large motivation for the type of things he did revolved around his feeling that he had never been loved, and could never be loved. Because of this, he started drugging people so they would “stay” with him. The idea that is stems from feeling unloved is possibly the only relatable thing about this monster of a man.

The song is written from the perspective of Jeffrey Dahmer trying to pick someone up at the bar, which is how he usually found his victims. Dahmer was somewhat religious, so the lyrics are written with the concept that he doesn’t want to lie, but obviously can’t tell the full truth of his plans.

I love you and your pretty face
what do you say we go back to my place
The song opens on Dahmer in a bar, trying to pick up an unsuspecting victim

oh beautiful, what do you think
I could fix you another drink
Dahmer would invite people back to his home with the promise of free booze, which he would spike with drugs to make them pass out
oh darling, I want to take you home
I want to kiss your lips
and bury your bones
This is a tongue in cheek saying, insinuating that he wants to stay with them for the rest of their lives….which he does…..

My friends they call me Jeffrey
They all live in my house
Dahmer would keep his deceased victims around the house. Usually dismembered, though not always entirely. Due to his feeling that he couldn’t be loved he would keep the remains of his victims in his home as though they were “choosing” to stay with him.
I try to bring a new one home whenever I go out
so you could call me Jeffrey
a plain and simple soul
I’ll take just what I need from you
and never be alone
I mean, that last line should be pretty obvious, right?

cause i’m a normal man with a factory job
trying to keep clean and pray to my god
Dahmer worked at a chocolate factory, and was unremarkable according to workmates. He would attend church with his grandmother and attend church with her on occasion
and I want to put you on a throne
I would give anything to make you moan
In writings found in Dahmers home, police found a notebook that contained plans to make a throne out of the skulls of his victims for him to sit on

And if you feel a sense of unease
like I’m a wolf sharpening my teeth
don’t be afraid to love me
just close your eyes and breathe
As mentioned above, Dahmer would drug the drinks of his victims which would make them fall asleep. He would lay his head on their chests and listen to their breathing and heartrate change. In this bridge he is calming his would-be victim, and encouraging them to relax and fall asleep for what would be the last time. Dahmer said he got so good at listening to their heart rate and breathing, that he could tell from listening to it when they were waking up. It was at that point he would kill them

My friends they call me Jeffrey
they say I have good taste
A pun? In a song? Yep. We do that. Obviously, his “taste” is referring to the fact that he ate his victims. In fact, when his home was searched by the police they found a stock pot full of penises on the stove…
I want to make you part of me let nothing go to waste
Again… making them a part of him by eating them
So you can call me Jeffrey
You’re what I’m dreaming of

cause after all I’m just a man who is looking for love
This is, in my opinion, the best line of the song. I don’t want this song or what I am about to say discount the fact that Jeffrey Dahmer was a monster. He killed at least 17 people. Thats a lot of families and friends who lost loved ones. He ruined many lived, and ended 17. That said, I wanted to explore what it was like for him. Jeffrey Dahmers childhood was not very loving. His parents drank and fought furiously. There wasn’t a lot of examples of a healthy loving relationship in his life. This was made worse by his sexual orientation being unaccepted at the time, and him feeling like he had to hide even more of himself. He became a severe alcoholic in his adolescence, and that would derail many of his chances at a having a more normal life. His heinous crimes were ultimately the result of him feeling that no one loved him, and no one ever could. So he made the abhorrent decision to force them to love him by killing them and keeping their bodies in a sick attempt to pretend they were there by choice. If only he could have felt the love he so desperately craved at a young age, perhaps this could all have been avoided. I think many of us, myself included, struggle with self-worth and believing we are worthy of love. In that, I was able to relate in a tiny way and write this song in such a way.

Writing process
Mosts of our songs take a different winding path to becoming a reality. This one began as my concept. I had the first verse and chorus, but that was about it. Canyon came over to my house, and thanks to our 20 years of writing songs together, we had it finished in about 45 minutes. Sometimes they roll out easy like that, but usually they are a bit more of a wrestle. Canyon has a great sense for writing songs; lyrics and melody. We brought it to the band soon after, though we hadn’t named it yet. We had a few names to choose from: My Friend Jeff, My Fiend Jeff, and a few others I cannot recall. Jared suggested No Means Jeff and we all collectively cringed. Since we couldn’t pick, we decided to flip a coin and let it decide. That is how we ended up with the title, which couldn’t be a more fitting name for the song. We had the amazing John-Ross Boyce (on instagram as Dawghands) work up the INCREDIBLE artwork that we made into a flag of Jeffrey Dahmer riding a zombie unicorn into hell which you can find here: