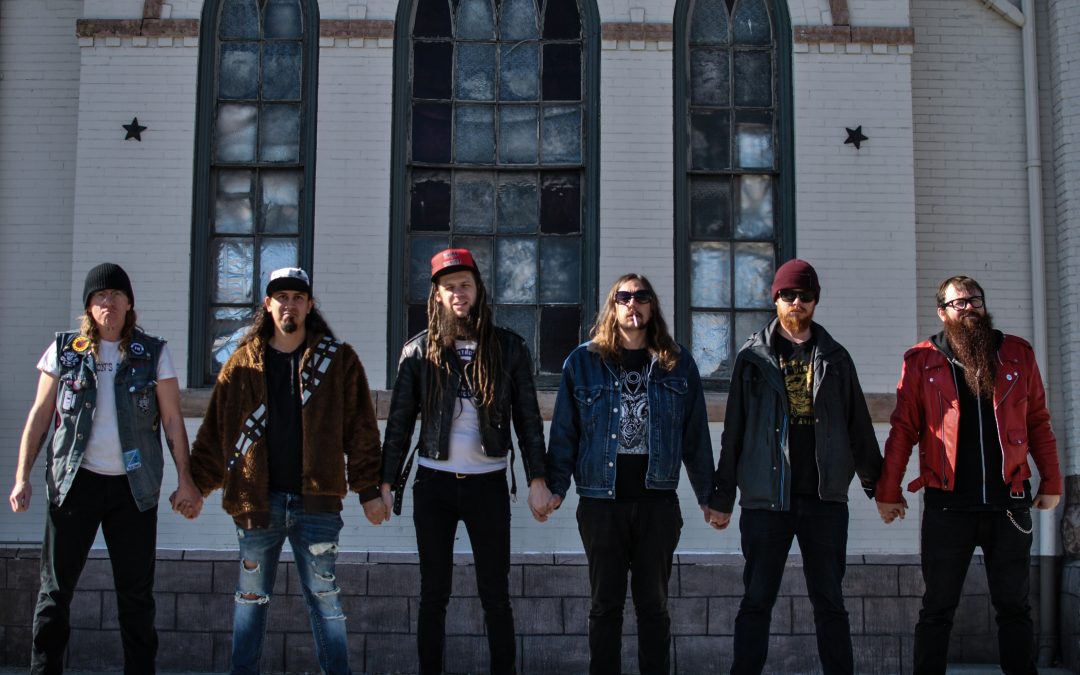 Hey FOLKers! This week on Song Stories we will be going over BOMSII. As always, first I will give some background, then have the lyrics accompanied by some notation and explanation, and followed by the writing process. If there is a song you want to have dissected, just email me at moses@folkhogan.com Also, you can have this song on our new vinyl record here:

BACKGROUND
This song has a lot of significance to us due to the lyrics subject matter. Where the original Band of Mighty Souls was about the mythical creation of FOLK HOGAN, Part II is about the reality of being in this band, and it ain’t all pretty.

LYRICS
By the time we crossed the border
the sun had barely set
It took us a while to get playing out of the state of Utah. Having six people in a band can turn you into a slow moving machine; you need to get six different peoples schedules to line up. Even though it took a bit to get to that place, I think we all knew that it was only the beginning. We wanted to conjure the feeling that we have of staring out at the horizon as the sun was setting, excited to get to a show, to face the unknown and show it what we can do.

and our girlfriends were home sleeping
with the wives that we had left
When you are gone pretty much every weekend playing shows, and sometimes for weeks on end; it can get hard for your significant other to cope with being alone. Thankfully, sometimes they reach out to each other and are able to keep each other company; be it dinner, drinks, or sleepovers

When the engine blew
and had nothing left to give
between the beers and songs
what else is there to live?
As we were recording our second album The Show

, the engine blew up in our van. Recording isn’t cheap. That album cost us about $6000, and when your only income is money from merch and from what bars pay you, it takes a long time to save it up. So, when you are in the middle of an extremely expensive endeavor, and the engine blows in the van making it so you cant get to shows….you get nervous. Thankfully, right before the engine blew, we played our St. Patricks day block of shows, which that year was six shows totaling fifteen hours of stage time in four days; we had JUST enough money to get the engine fixed to we could play more shows and finish the album. But you do have a moment of “oh shit, is this going to end us as a band for a while”. Ultimately, between drinking beers with your best friends and playing songs with them… does anything else really matter?

hold on tightly
hold on to me
Oh, I’ve never needed time to breath
There are these moments where it feels like we are barely able to keep up with the momentum the band has. It feels sometimes like we are holding on to each other for dear life, just hoping we can keep it together through the hard times and achieve greater and greater things. In those moments when its all working, it makes the hard days worth it. When we are on stage and everything is clicking, you want to just go, go, go. You don’t want to stop and take a breath, only to keep soldiering on.

Each foe we encountered we slayed with our rock
This is going to sound a little arrogant: I have an unquestionable faith in this band. We have taken the stage with not only some big names, but also with our heroes. Reverend Horton Heat, Anti-Flag, Cold War Kids, The Slackers, Th’ Legendary Shack Shakers, Amigo the Devil, Metalachi, the list goes on. We have played with bands from every genre, in every style, with every level of intensity. And every time we have felt like it was a challenge to see if we were good enough. Every time, when I walk off stage, I know we fucking killed it.

We met many creatures, but few who could talk
We have met a lot of characters over the years, and most of them tend to be really inebriated, and hard to understand

The path of destruction is far and its wide
with signs of construction to keep us alive
We tried to help build wherever we could
If you’re better at breaking, then stick with whats good
Look, we have put this band before our jobs, our friends, our hobbies, our families, our girlfriends, our wives. That has consequences. Some of us have lost people that were dear to us because we chose to focus on the band. We have lost members because they couldn’t keep up. There has been an incredible amount of collateral damage over the years; but the signs of the band building into greater and greater things keeps us going, even when it comes at a loss.

no gods to offend here, we can’t make them cry
we’re thousands of miles from their prying eyes
If they sat in our presence they’d die!
This is a reference to the past versions of ourselves. We were calling our selves gods when we had only played a few dozen shows and recorded a demo. Those kids had no idea how crazy it would get, or how hard it might become. If we could put out past selves in our current shoes, they wouldn’t be able to handle it. Being in a creative group can really take a toll on your perception of your own abilities. If you get told “no” enough, it can cause you to doubt yourself. You have to look past those moments, and realize that your opinion is still valid and next time it may be different

hold on tightly
hold on to me
oh I’ve never needed time
Deliberately, the word breathe is cut off here, because sometimes you just have to grit your teeth and keep rocking without a breather.

We shouldered the burden, the weight of the crowd
We are human, and sometimes we have bad nights. Sometimes, you have to get up and do your best to entertain no matter how hard it is. It can feel like a burden sometimes

we learned quiets fine, but what’s better is loud
We pride ourselves on dynamics. It is impactful and nice to get quiet. You know whats better? playing AS HARD AND A LOUD AS YOU CAN.

It’s damn hard to speak when you don’t have a voice
and damn hard to choose when you can’t see have a choice
This continues the discussion of the difficult times where it feels like your ideas aren’t being heard in a band. When there are six different opinions on something, there are guaranteed to be a few people who have to concede. It can be hard not to take it personally, but we have to remind ourselves that we all have the same goal.

we’ll bathe you in beer and drench you in sweat
give you a night you’ll never forget
This is what it is all about: those nights where the show is a loud, crazy, party. Where we just find the grove and get the feedback from the crowd

It’s fine to venture out on your own
up here in the lights, we’re never alone
up here you’re never alone
Since we have been together for almost ten years, we have periods where one person might not be able to devote themselves to the band as much, or someone is withdrawn due to stuff in their personal lives. Most the time when you are on stage, all of that melts away. Sometimes when you are on stage it doesn’t, but regardless we are all here for each other. We have all be fuming mad at someone else at some point, but I would still take a bullet for any one of them. We are in this together. If I die tomorrow, these five guys would be my pallbearers. We are brothers, to the bone.

hold on tightly
hold on to me
oh, I’ve never needed time

It’s all just a warning, acceptable to some
by the time it hits you, it’s already begun
This whole song is sort of a warning to our younger and current selves about the troubles ahead that will befall us. A younger version of me may have heard these warning and deemed them worth the trouble. By the time you actually start seeing what can happen, it’t too late to stop it, your investment is too great to walk away most of the time.

the path to the horizon is a harrowing drive
we’ll drive on through the night
We don’t know if our future has us reaching still higher goals, or breaking down on the road; but regardless of what happens we will make the journey, because….

they’ll never take us alive!
sometimes it feels like the only way off of this train is in a bag. You might have to kill me to take me away from FOLK HOGAN, and that is a fight I will be happy to wage.

At the end of this song when played live or in the Warner Bros. version, I scream “GO!” at the end. Thats not just to bring the emotion out, but also a command for the band. Let’s get out there and kick some ass. Let’s slay those foes. Let’s show this world how good we can be. Let’s get in the van, and see how far we can go.

WRITING PROCESS
Canyon and I have been writing songs together for twenty years now. Sometimes, when we sit down to write we just drink and bullshit like we always have. Other times we sit and write a song in a matter of minutes. This song, for as in-depth, and meaningful, and special it is……took about 45 minutes to write. We wrote it on the porch of Canyons house one evening when practice was cancelled. It just fell out of us. Sometimes you write a song, and sometimes you are just a conduit to breathe life into it. This song was as if it was floating above our heads, and we reached up and plucked it out of the air.