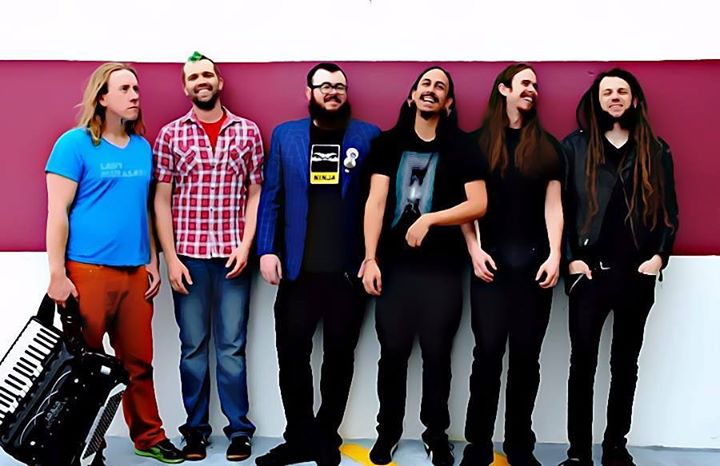 Hey folkers, Moses here. 2017 comes to a close, and what a year it was! Pull up a chair, grab your drink and let’s look back at what happened.

The year kicked off in grand fashion when we opened once again for Reverend Horton Heat at The Depot. There’s something so nice about playing on a big stage and having all the room to swing my dreadlocks around without whipping the band mates in the face. I had the good fortune of watching the Rev tear it up from the side of the stage, and we all hung out with Jimbo after the show for a few drinks. It set a great pace for the year to come.

Later that month we played The Hard Hat lounge in Las Vegas, the Yucca Tap Room in Phoenix, and the Monte Vista Cocktail lounge in Flagstaff. Monte Vista is in an old hotel that is supposedly super haunted. To prove our greatness we consumed all the spirits they had and slept in the bunk beds of the “Band Only” room. The Dragon broke down the next day on the way home so we ended up spending the whole day drinking while some resourceful fellas in Kingman, Arizona brought the dragon back to life.

Between a night in Vegas playing the tattoo game, a home cooked meal from our amazing tour grandma (aka my actual grandma), the haunted hotel, and the van braking down in Kingman, it was quite the trip. Oh, and I drunkenly bought a piece of art. -Curtis Stahl

February brought two incredible shows back-to-back at Urban Lounge. First up was Steve’n’Seagulls, the Finnish band that jumped to fame with their viral video and cover of Thunderstruck.

“A few years ago an video went viral. People were posting it to the Folk Hogan page, tagging us, sending it as message, etc. That video was of Steven Segulls playing Thunderstruck by AC/DC. You can check it out here: https://www.youtube.com/watch?v=e4Ao-iNPPUc.

So when we were contacted by the Urban Lounge this past year to open up for them it was a no-brainer. It was everything and better than we could have expected. We met lots of new people, gained a few new fans, and got to share the stage with an amazingly talented band. I look forward to more shows like this in the future!” -nick passey

From first song to last it was like there was a war vein fought on stage.
Only a few days later we played with Forkroot, from San Diego. We were speechless. The talent they exuded was jaw-dropping, and their compositions were beautiful. We will be playing with them in January 2018 in Southern California.

March, our favorite of the drinking months, started with a show at one of our favorite venues: Diamondz in Jerome, Id. We took the stage with none other than The Young Dubliners. A band that had been a big influence on me, the Dubliners showed the crowd just why they have been touring for over twenty years and never missed a beat.

As summer rolled in we stayed busy playing shows and preparing for the annual Beerball Championship. To the surprise of no one, it was a “who’s who” of parties. The final round saw Nick Passey and his teammate Phil Faber (Beerd Team USA) come up against five-time champs Jared Hayes and I (Ballrope0452). The champs made it six in a row, by going undefeated on the day. If you think you have what it takes to beat the champs, join us for the 2018 Beerball Championship on June 30th.

Late summer brought a host of amazing shows, three at our favorite event Blues, Brews & BBQ at Snowbasin Resort. First with Jelly Bread, then with the extremely energetic Andy Franco, and lastly with a band we’ve been trying to play with for six years: Larry & His Flask. If you haven’t heard them, you’d be doing yourself a service by looking them up. For years we have tried to play together, but when they come to Utah we are always already booked. The stars aligned and we played what was the most powerful lineup of the year. Keep your ears and eyes open as we may be playing with them in 2018.

We closed the year out with a furious performance at O.P. Rockwell’s in Park City, for the KPCW Main Street Music Crawl. It was without a doubt the most electric performance of the year; pure unadulterated raw power.

“When the planets, and stars aligned, they aligned at OP Rockwell. I’m not sure any of us expected that event to tear our faces off, but it did. Crowd energy was high as Courtney Love. The music was as fast as a Concorde, and the booze was as smooth as Josh Homme kicki.. er.. nevermind. “ – Kameron Anton

So let’s look forward to 2018, we have some real special stuff in store. We will be recording our third full length album, touring, playing shows, and having all the fun we can. Please join us!