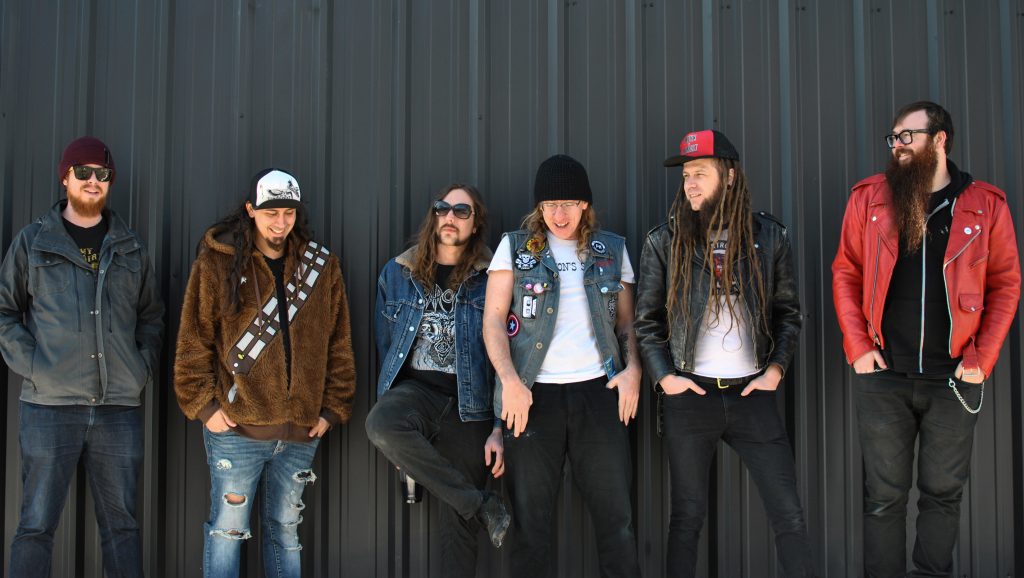 Folk Hogan is a high velocity, folk/punk band with a lively stage show that is widely appealing, and downright awesome. The six-piece lineup consists of Accordion, Mandolin, Bass, Banjo, Guitar, and Drums. Folk Hogan brings a mix of experienced entertainers, humor, and whiskey that will keep a crowd dancing while wishing they had a backup liver. 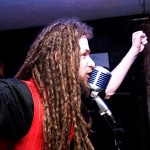 Vocals and Mandolin Moses McKinley is the amazingly fast mandolin player for FOLK HOGAN. His speed and grace on his instrument may come directly from the gods of punk rock playing through him, or it could be the years of practice he has put in to honing his skill. Starting out on the drums and later moving on to guitar, he has played guitar in bands such as Guitar Soup, Canyon and the Big Fat Bass Turds Band, Nothing Else, Canyon Moses and the Trees, When Jack Spins, and Rise of Reason just to name a few. He has also released a number of solo albums, such as his “Semi-Coustic” (2004) and “Looking Up & Cursing” (2007) Later moving on moving to mandolin and playing for “Devils Cuntry” with Tanner (former banjo) until he left the band for school in 2009. He has now settled in to his position as mandolin player, singer, and one of the founding members of FOLK HOGAN! If you are lucky enough to know Moses for a long time or even just meet him for a second, you will see he is one of the coolest, sweetest, most genuine and caring people there is, and he can still party until the sun explodes. Moses once battled fifty-thousand demi-gods and all of their armies. Their armies were so large that they spanned continents at a time and when firing arrows they blotted out the sun. Moses battled fiercely with nothing but his mandolin, atop a mountain. Some say that when you hear thunder, it is the slain bodies of the demi-gods and all of their armies falling to the ground. Moses plays a mandolin built by Big Muddy Mandolin company. He currently lives in Salt Lake City, Utah, with his beautiful wife Toe, and bird Duke. He works as a Luthier, making stringed instruments, and music sound better every day. 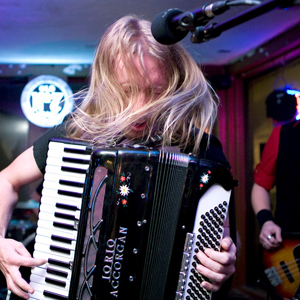 Vocals and Accordion Canyon Elliott is one of the charismatic, fast talking, quick-witted rock gods that make FOLK HOGAN what it is. Son of Eilidh and the legendary Larry Elliott, canyon has spent his whole life around greatness, and therefore it is ingrained in his soul. His humor and intelligence is known by many, and appreciated by all. Canyon began his musical journey in his teens with guitar and piano. He began dabbling with accordion when recording his first solo album, and has blossomed into a force. One day, Canyon was in need of a new accordion, and remembered an accordion greater than any other in the universe. It’s sound was thunderous, but it’s weight was greater than any man could bear. It was known as Thor’s hammer, and was owned by the god of thunder himself: Thor. Through a series if quick witted, strong, and masterful actions, Canyon stole Thor’s hammer. Thor jumped forth with great fury to attack FOLK HOGAN, but alas, we were playing a most righteous show. When he heard our music he wept with joy and pledged himself to FOLK HOGAN for eternity. Canyon has been involved in more bands than could be possibly listed here. When not performing in bands he has also written the score for several films, and has done studio work for other musicians. His live for music can only be outdone by his live for his beautiful daughter Rowyn. Canyon currently lives in Salt Lake City, and loves to party. 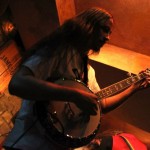 Banjo Kameron plays banjo in FOLK HOGAN. He showed up with a banjo on his knee singing old Susanna and all of our songs. Within a few weeks he was playing shows, recording a new album, and drinking like he had always been in the band. FOLK HOGAN is the first band that he has ever been in. He plays a grip of other instruments and has a extensive stamp collection. 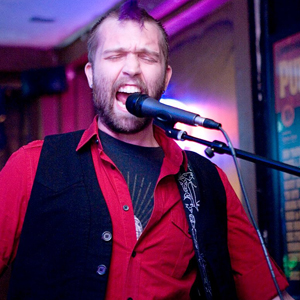 Bass and Vocals Ascending to Earth as a Beacon of light from many dimensions, and lifetimes away… Jared was brought here, like many others, to find and experience the delicate balance between all plains of existence through endless love and limitless understanding. By mastering the magic of awkward movements at an early age, Jared can channel the power of the cosmos with a simple wink of his eye and a sporadic shake of his booty. With a pucker of his lips and a whip of his mustache, He has conquered the underworld of the ancients, to rule the armies of the undead. One day, with this army, he will destroy the essence of darkness that has suppressed our inner light from reaching its true potential. Harnessing the wisdom and power of an ever-expanding consciousness, he is destined for all that is epic and awesome. He will conquer the powers of negative fortitude forced on this physical plain of existence one earth-shattering bass line at a time. Showing all that are willing to see; that the reality we live in is a reality of our own making. You can shape and flow with the inevitable changes that this world is about to experience with the simple recognition that: “YOU HAVE A MUCH GREATER LEVEL OF POTENTIAL IN YOU THAN YOU ARE LEAD TO BELIEVE.” “WE ARE GODS!” “Now Get Folked!” 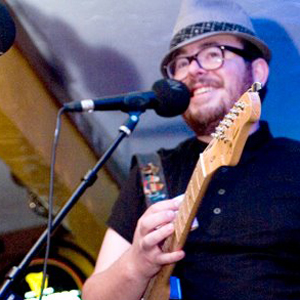 Guitar and Vocals Nick Passey goes only by his full name and has been known to notoriously not hear those who address him as “Nick”. Nick Passey the guitarist of FOLK HOGAN brings a well stocked fridge of both musical genres and experience to the band. His callused finger tips are as hard as his also Vegan spirit animal the Rhino. Nick Passey has been performing, writing music, and breaking strings for nearly his entire life. Learning to play guitar at the age of 14 and performing in a just few short months he has continued to play in bands in various positions, performed as a DJ, and mixed live bands. Nick Passey’s experience is well aligned with an intimidatingly long lineage of Touring Jazz Musicians, Performing artists, and Music Instructors. He has no shortage of war stories from former teenage band Die Panda Die. Some include: Being electrocuted on stage, Having multiple shows being shut down by Provo’s SWAT team, Being stricken with a guitar hard enough to knock him out, Using 5 fog machines on stage to the extent of having the Provo fire department shut down a show, Purposely breaking numerous ceiling tiles and stages, Taking blackmail photos in the city of Seattle on stage for gas money while on tour, Playing and recording with the Gentry from Portland, Pretending to shoplift with the band so we could get caught with a 20 inch Double-Headed Dong in there bag, Best Dress Cigar-Mini Golfing, Gluing enough show flyers on the city of Provo to formally deploy the graffiti team, Causing a Parody band of Die Panda Die, Pouring 10 Gallons of fake blood while throwing spaghetti-o’s filled paper-mache pandas at a crowd, Being attacked by a Vodka filled pro-wrestler, and having a venue’s building condemned after fans destroyed it (allegedly). 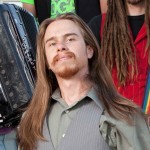 Drums Curtis Stahl decided to come to Earth in order to rediscover the Infinite through the epic vibrational art we refer to as music. He began this rediscovery by being born into an amazing family which included: a sound engineer as a Father; a vocalist with beautiful melodies as a Mother; a woman with the perfect harmonies as a sister; and a Godly guitarist as an Uncle. With influences as great as these, greatness was engrained into the core of his being from the dawn of his existence. Having been at a rehearsal weekly from the age of 2 weeks, he has learned much of letting love and light travel through an instrument so as to change the lives of everything that comes into contact with that vibration. One day, it was foretold that he would show people of All Nations how to experience the true Power within that no Force can reckon with. “Drumming” is one of the many mediums he is to use in order to accomplish this. With every hit of a drum he brings all the natural rhythms of life from all sectors of the Universe into the present moment. Curtis was to learn all he could from different forms of this art in such ways as Singer-Songwriter form with “DevineWrite”, Progressive with “Wafer”, percussion with Alt-Rock “Funk&Gonzo”, Funk- hop with “Grits Green”, and then through the music of the gods “Folk Hogan”.