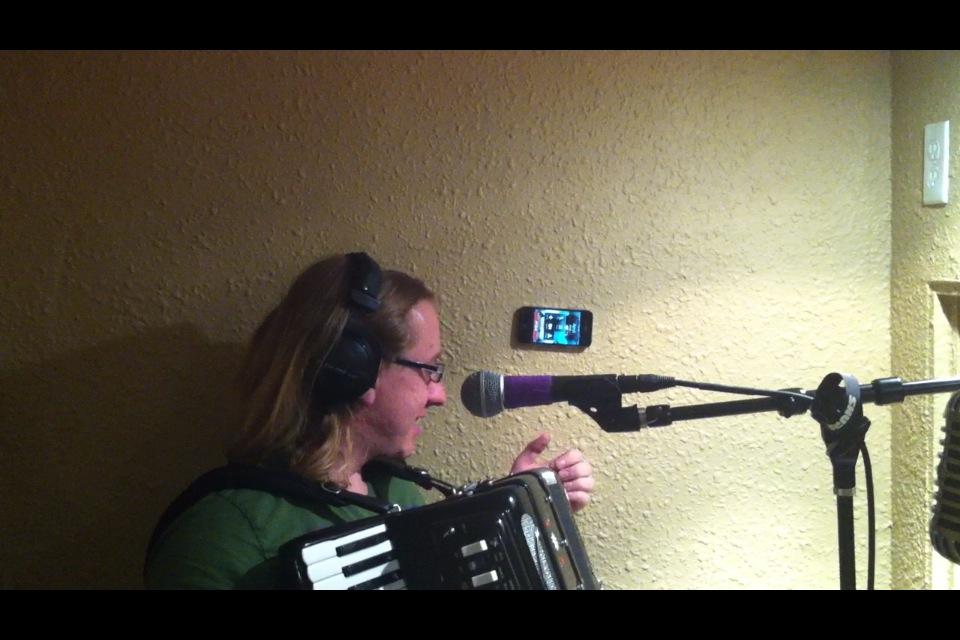 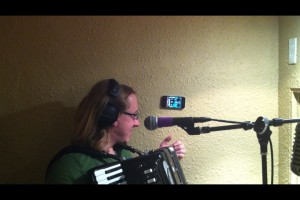 Oh my what a crazy lifestyle we lead being musicians. At times it like working a job as a crazy person with fitting hours. When I arrived at the studio around 8pm I was met by Canyon and Jeremy making a fresh pot of coffee. Both looked pretty exhausted and we were in for a long night, as recording is hard work, so hopefully a little caffeine would perk things up.
The band is pretty stoked on the iPhone, we use it for everything, including taking payments for merch on the go, recording videos, writing songs, tuning instruments, and many more. Its a revolving joke between us how the iPhone can do anything.
The night was filthy with conversations about all of our simultaneous merch and new implements for music distribution while maintaining our schedule of shows and keeping our websites and pages up to date.
When moses arrived and the regular crowd of mere mortals cleared we began to run audio snakes and plug in a grip of cables. With direct boxes, XLR cables, and 1/4 inch guitar cables running over the floor like spaghetti missing the final topping, headphone cables.
Some quick testing of the preliminary mix and a handful of notes from our now deleted 13 hour day of pre-production we were ready to lay tracks. Necessity is the mother of invention and we had gathered the collective idea of recording all the tracks at once, and scraping all but the drums one at a time to record over them.
Experienced with recording, FOLK HOGAN presents new ideas and processes to the session. Our unique brand of instrumentation, dynamic sound, and sense of humor add our own creative spin to this process.
3 members Canyon, Moses, and Nick in the “tiny room” and Jeremy in the main space, we were very cosy. The 3 of us crammed in the room began to edge toward cabin fever, but all of us yielding iPhones we were forcibly self-entertained.
The band will eat just about anything you put in front of them. After longingly watching them eat pizza, because I do not eat dairy, the last two practices I brought stir-fry. This is a good tradition to set in the future for recording and it makes things more easy on everyone putting in long hours recording when we’d be home relaxing after our regular schedule. Maybe you could bring us food reader? I’ll send you a list of allergies and diet restrictions.
I was very intrigued to learn that both Moses and Canyon do not own computers and do everything from there iPhones. It reminiscent of the Taiwanese tech culture crowd I have interacted with and truly a representation of technology usage of our time.
At one point attempting to capture video footage without a dedicated operator Canyon opted to tape his iPhone to the wall of the tiny room. As you can imagine much wackiness ensued.
Canyon and I started hammering out a chord progression in between tracks giving the computer time to catch up with the 14 simultaneously placed tracks laid. We look pretty primitive flowing in a language that consists of grunts and not words doing so.
One of the more entertaining things that happened is when Canyons taped-to-the wall iPhone started ringing, out loud, during a recording take of Zombie Prince. When he called back wackiness ensued, stories told, and it was obvious he had been drunk dialed.
Late that night at about 2:30AM Jeremy and I were able to take a listen and  see where the drum tracks were at and listen to the scratch tracks on top of them. With a much more hopeful outlook than our previous session, little retakes or “punches” will need to be made to a few sections, but the drums are now 90% solid.
It was a good day of tracking and we all learned valuable lessons, you are never drinking alone if you drink “via Skype” and organic produce is killing the price of food.